I have a need! Demand behaviors and how to “fix” them 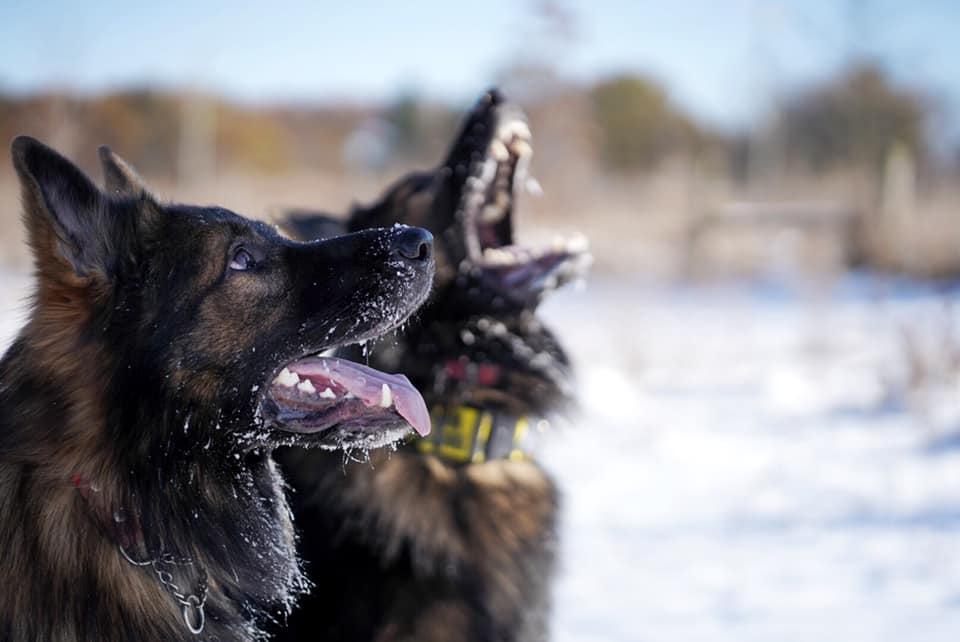 In a human example of a demand behavior, I once saw a (rather tired looking) mother in the grocery store with her three rowdy sons. I watched as one of the boys picked up a package of something full of sugar and proceeded to repeat “mom! mom! mom! mom! mom!” at her – I counted around 20 repetitions before she turned to him and scolded him “how many times are you going to say my name?!” – before proceeding to answer his question. I’d guess that the boy may get up to 25 or 30 in future instances since 20 worked out so well despite, or perhaps because of, his mother’s scolding.

Switching gears slightly, let’s start with defining demand behaviors in dogs. A demand behavior is a way for a dog to communicate that they want or need something. They typically grow stronger once they realize which behaviors produce the greatest chance of the desired outcome. For example, I know of many dogs who demand bark mildly when their owners are unoccupied, but who demand bark far more intensely when the same owner is on the phone or trying to have a conversation with someone? Why is this? While I can’t ask the dogs directly, I’d be willing to guess that the dogs have learned that their humans have a much quicker response time when occupied than when unoccupied. Nobody wants to listen to a dog barking like crazy while they’re trying to talk to someone – it can be embarrassing!

So here’s the dilemma – we don’t want to reward the demand behavior by telling our dogs to stop, but we also don’t want the behavior to continue (after all, practice makes perfect). We also don’t want to teach our dogs that demanding us will create an opportunity for reward for them – for example I see a lot of dogs that will jump, the owner will say “off! sit!” in a stern tone, the dog gets off and sits, and then the dog gets attention, praise, treats, etc. Even though it was the good behavior (sitting) that “earned” the reward, the initial jump is what caused that opportunity to present itself. I’ll write about this in more detail in a future article on behavior chains.

Many demand behaviors can be resolved by taking a look at whether our dogs’ mental and physical needs are being met. Is your dog at his most demanding an hour after you come home from a busy day at work and are trying to relax? Remember to keep in mind that while we’re at work, our dogs often don’t have much to do, they depend on us for their mental and physical stimulation needs. Otherwise they come up with ways to fulfill those needs on their own, which usually involves some destruction such as chewing furniture and shoes, digging holes in the yard, etc..

If your dog is at his most demanding at a specific time of the day, analyze whether he has unmet needs that are at their peak around that time, and work to meet those needs before the demand behaviors start, ideally at a time when your dog is at his best behaved out of the sequence leading up to when the demand behaviors begin. By curtailing the behavior before it starts, we prevent our dogs from practicing the unwanted behavior and getting better at it, as well as teaching them a new (and preferred) end to the previous pattern.

I will write about ideas for how to fulfill your dog’s mental and physical needs in a future post.

Button pushing, or how to teach your dog to say please

As with many other things, the best training typically doesn’t come in the “heat of the moment.” What we want to do is two things: first, teach our dogs that their demand behaviors no longer produce the desired outcome, and second: teach our dogs that a new or different behavior will produce the same or a better result. I hear a lot of clients say “he’s pushing all my buttons, he knows exactly how to get on my nerves!” and I honestly love that analogy. We can use that as a handy visualization and divide our dogs’ demand behaviors into two categories: “good” behaviors and “bad” behaviors. I put good and bad in quotes because whether a behavior falls into one category or the other depends entirely on whether the owners like it or not. I find my dogs jumping on me in certain situations to be endearing, many other people find the same behavior to be rude. I find hand nudging for pets to be annoying but know lots of other people who find it sweet.

Below is an example of a chart of “bad” button behaviors vs “good” button behaviors. It isn’t comprehensive, it’s meant as an example. Also, just because I’ve labeled a behavior as good or bad in this post does not make it such for everyone. I encourage you to make a similar chart of your own for your dog’s demand behaviors, both good and bad.

It’s much easier to notice our dogs when they’re being annoying, a quiet dog isn’t going to immediately get the same level of attention from us as a dog that’s barking or jumping in our face unless we’re making a conscious effort. Choosing something your dog is already doing can make the process easier – I worked with a mini Aussie one time with a very well-rehersed demand barking problem. He rarely offered any behaviors other than barking, but at one point I caught and rewarded him for backing up in between barks. Within the span of a few minutes, he went from rapidfire barking at me for treats to quietly and thoughtfully walking towards me, looking at my treat, and then backing up. Big emphasis on the quiet portion! But the important element to note in this example is that I didn’t choose something typical for him because he wasn’t offering typical behaviors, I chose backing up because he was already trying it.

If you would like your dog to offer a specific behavior to request something, such as ringing bells to go outside, you’ll have more success making sure that the behavior is already something the dog offers. Set up a scenario where you teach or request the behavior you’d like, and then start to make it look more and more similar to what you’d like your dog to do in the long run. In the example with the dog who barked for attention while her owner was on the phone, teaching the dog to lay down calmly could be a good alternative. Start by asking your dog to do it, rewarding, moving and encouraging your dog to get up, and then cuing it again. Sometimes give multiple rewards in position, sometimes just one. You can even give more exciting rewards the more still/relaxed your dog is. Once your dog is starting to offer the behavior before you’ve cued it, you can start to add in the picture of the phone – first holding it, then holding it to your ear. Separately, add in the picture of pretending to talk (no phone present), then once your dog is offering the desired behavior while you pretend to talk into an invisible phone and while you hold the phone to your ear while being silent, you can combine the whole picture and have a pretend phone call, then a real phone call.

This is not a complete instruction manual on how to fix every type of demand behavior, merely an example of how you can break down scenarios your dog struggles in into smaller pieces, set your dog up for success, and replace an unwanted behavior with a more appropriate one. If your dog “fails,” make a note, make the scenario easier, and then increase the difficulty as your dog shows that she is ready. There is always a way to split things down further, sometimes it just takes a bit of creativity.

To punish or not to punish

There often comes a point with clients where they ask about punishing a demand behavior. While it can be fairly tempting, this is where we loop back to the kid in the grocery store example. If our dog is requesting attention, and we tell her to knock it off, isn’t that giving her exactly what she wants? More importantly, the majority of the time the punishment doesn’t actually prevent the behavior from occurring again in the future.

As a general rule I aim to avoid punishing my dogs and those I work with as much as possible. I want to be a teammate and a friend to my dogs, not a cop. While I’m sure there are plenty of ways that people have successfully structured punishment as a means to prevent or eliminate demand behaviors, in the majority of situations I’ve seen it applied I’ve the demand behaviors either stagnate or increase in frequency.

That doesn’t mean I let my dogs regularly practice bad behavior and wait them out, extinction is far from the most efficient means of getting rid of a behavior. If the behavior is happening, either remove yourself or remove your dog from the situation with as little attention given as possible. Make a note of the scenario and work to prevent or mitigate that need in future before the scenario presents itself again, or work with a professional trainer to develop an individual plan for you and your dog.

When thinking of your dog’s unwanted behaviors, picture the button grid. Do you want to see the behavior again? Respond to it as such. Do you not want to see it again? Don’t let it produce the goal outcome. Remember, “reinforcement drives behavior,” so if a behavior is getting stronger it is being reinforced.